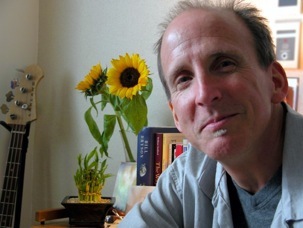 If there's one snippet of the pop lexicon that musician Richard Gates of Jamaica Plain can relate to, it's Tom Petty's 1981 line "The waiting is the hardest part."
It took four years and brought him a new heart.

In 2001, Gates had a defibrillator surgically implanted in his chest to work as a pacemaker in case his heart went into arrhythmia. When Dr. Michael Sweeney, the surgeon who performed an eventual heart transplant, learned Rainbow was a musician:  "He asked me to bring in my bass and put it on so he could implant it away from the guitar strap"'  said Gates. " 'You have to get out there and keep playing,' he told me."

Of the 6,210 people waiting nationwide for a heart transplant in 2004, Gates was one of the lucky ones with his new heart. He plays more than ever and will soon be completing  his 3rd bike ride from Ohio to Boston!

Singer/songwriter Kristin Cifelli said:
"Ironically, Richard has the biggest heart on the planet. He is so appreciative of every single note of music that he gets to play."